Learn more
Ok, Got it
Secrets Insights 2022 – Apiiro Skip to the content

Across the Software Supply Chain

To discover and understand real-world risks of hardcoded secrets across the software supply chain, Apiiro’s Security Research team analyzed a total of:

All data was collected and analyzed from internal repositories of small to large organizations, providing us with statistically significant data and actionable insights.

All data was collected and analyzed from internal repositories of small to large organizations, providing us with statistically significant data and actionable insights.

The average number of detected secrets per 1K commits: 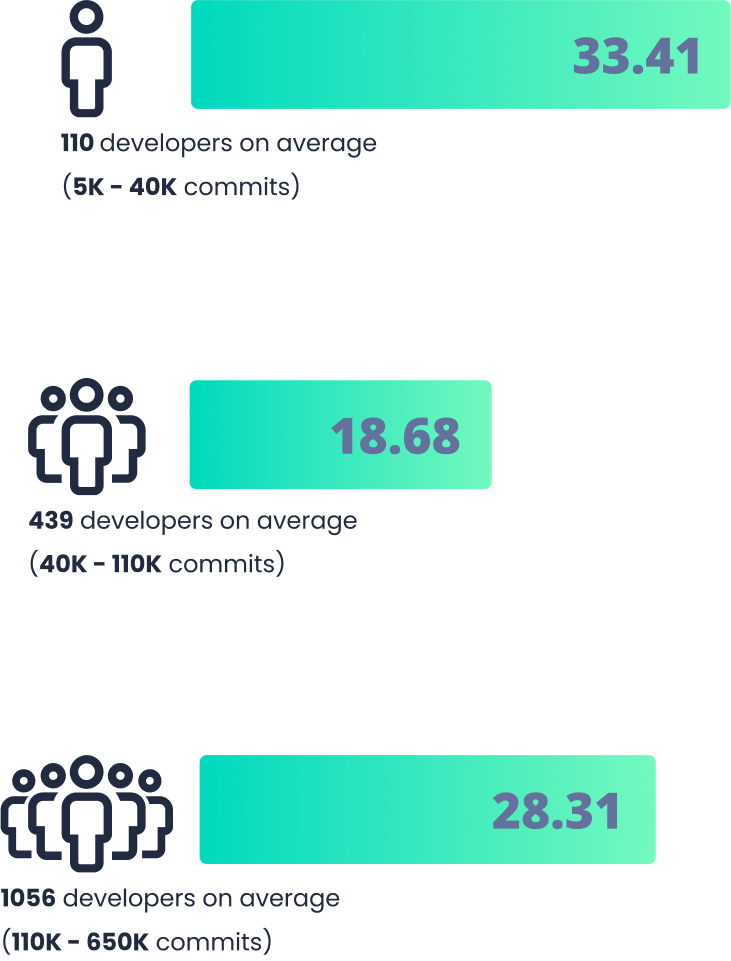 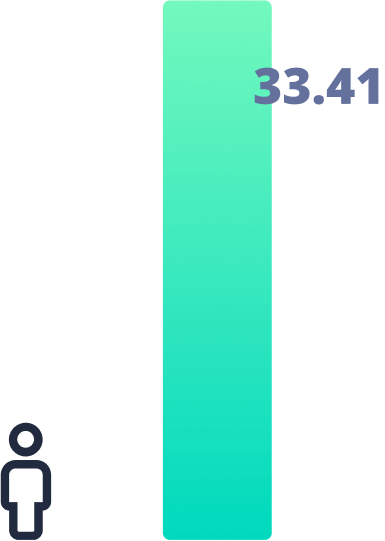 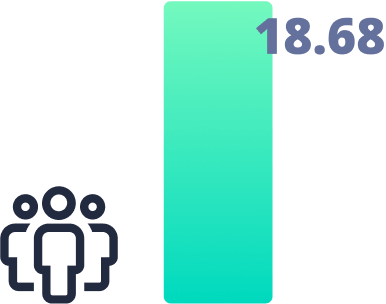 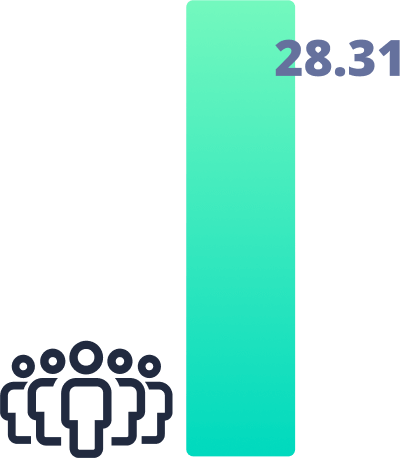 25.7 commits out of 1,000
expose a secret. This number is more
than 8 times greater than the number we
see from reports about public repositories.

This number is more than 8 times greater than the number we see from reports about public repositories.

When we focus on secrets distribution per repository, we find that almost every 5th repository (17% of all repositories) contains at least one stored secret 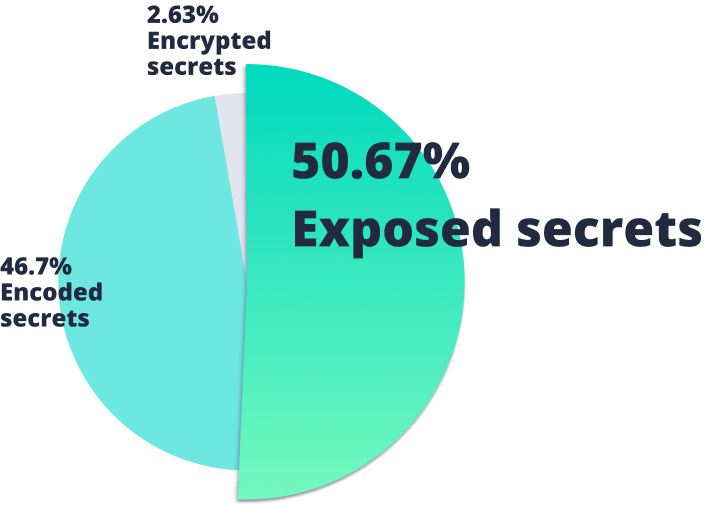 This means that every other secret found can immediately be used by a malicious person who gets access to the relevant files.

While secrets come in all shapes and sizes, the ones that pose the greatest risk are those which can be used as-is. Others may need to be decrypted, which slightly reduces the likelihood they will be exploited, thus causing less of an impact in terms of abuse potential.

An example of an exposed secret can be an API key. When used, it may give an entity the ability to collect data, modify records or spin up new instances, just to name a few common operational permissions possible with an API key.

A real-life example is the Twitch Code Leak, which was a massive data breach that included source code and creator earnings, leading to severe brand damage.

Encrypted or hashed secrets might need to be “brute-forced” to decrypt them, meaning their use is constrained in a way (for example, Slack webhooks that can be used for spam only) that limits abuse potential and leads to a substantially lower risk than exposed ones.

For every 1,000 repositories with secrets,
about 7 repositories have secrets that are
exposed to anyone on the Internet.

On average, there are 3.28 secrets in each repository. When we focus on repositories that have secrets, each one has 29.64 secrets on average. Also, 0.72% of repositories with secrets are public. 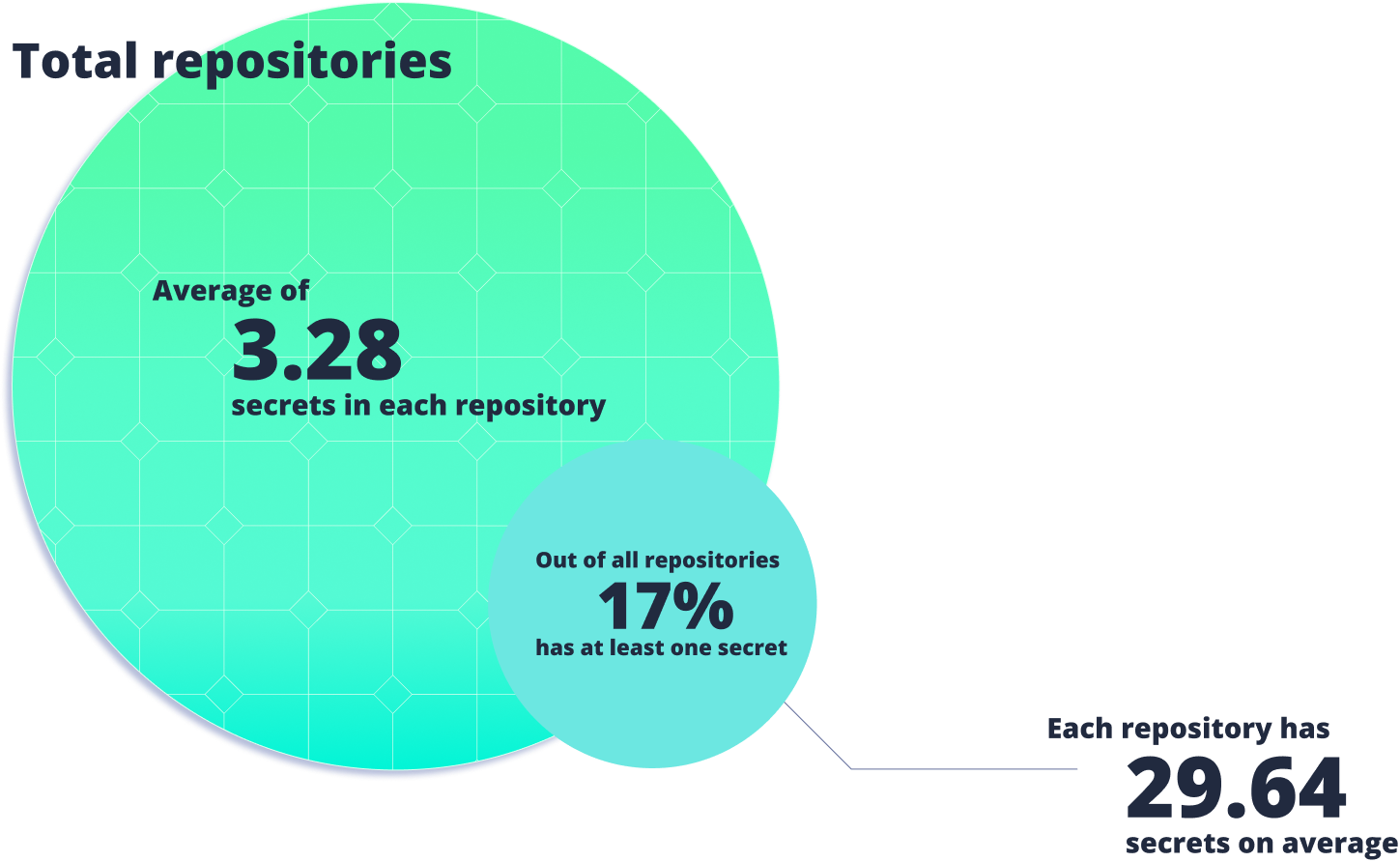 The people behind secrets 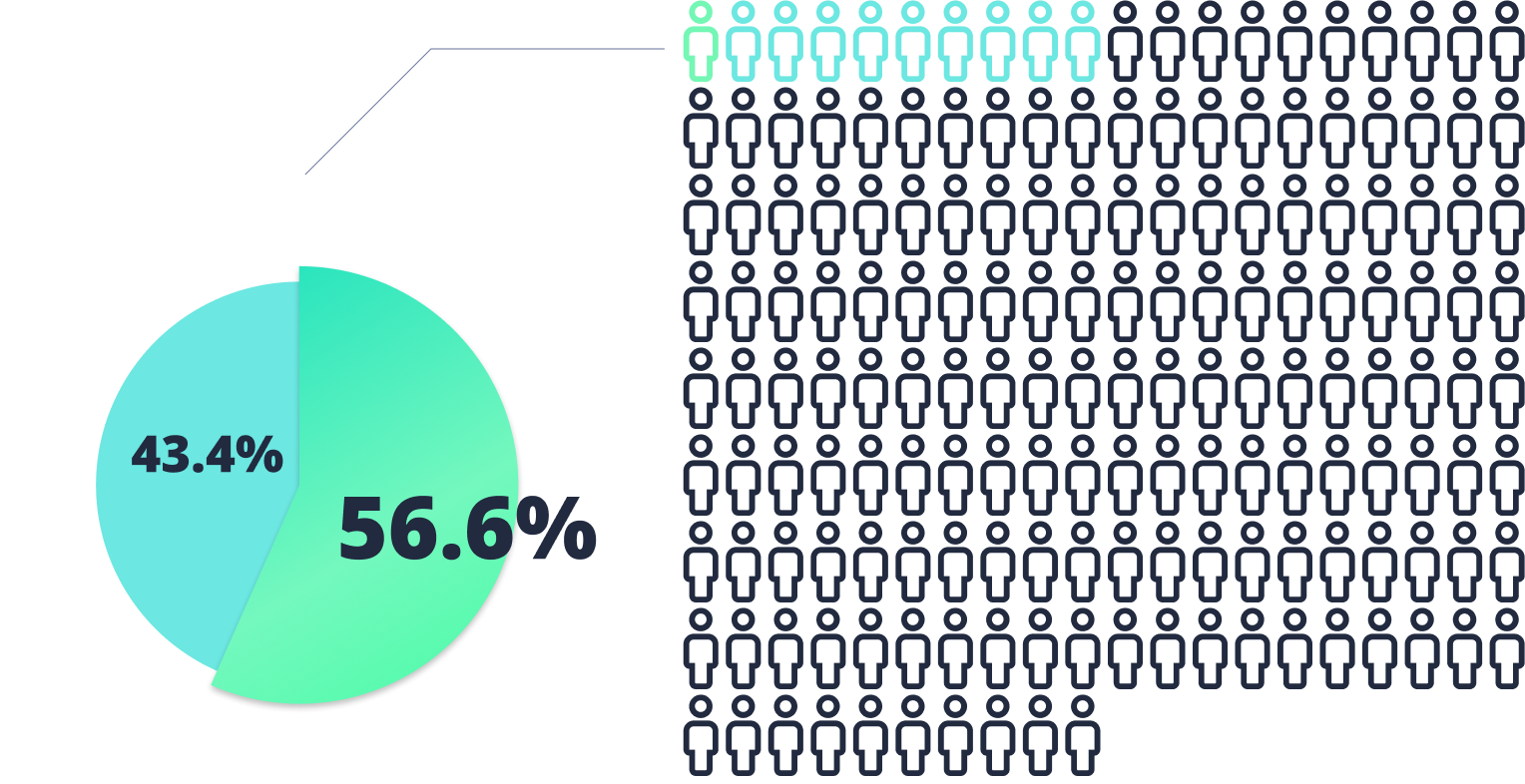 Out of all secrets

are in repositories with PII

of the secrets in these repositories are exposed secrets

out of all secrets are exposed secrets

Combining all these factors can lead to a severe breach that can cause serious damage to an organization. 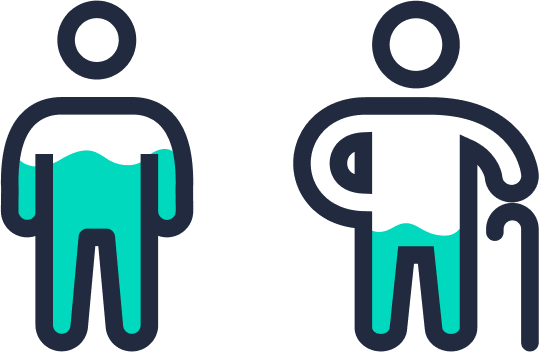 Percentage of detected secrets per month across all organizations

Normalized by number of commits

The first quarter of the year accounts for 34.34% of the detected secrets.

This observation is consistent with the notion that an organization’s activity at the beginning of the year affects the number of secrets inserted. For example, organizations have more code commit activity following new contracts, new features implementation, license renewal, and etc.

The majority of secrets are found in formats typically used for configuration files. More than 40% of all the secrets are detected in YAML files, and more than 39% in JSON files 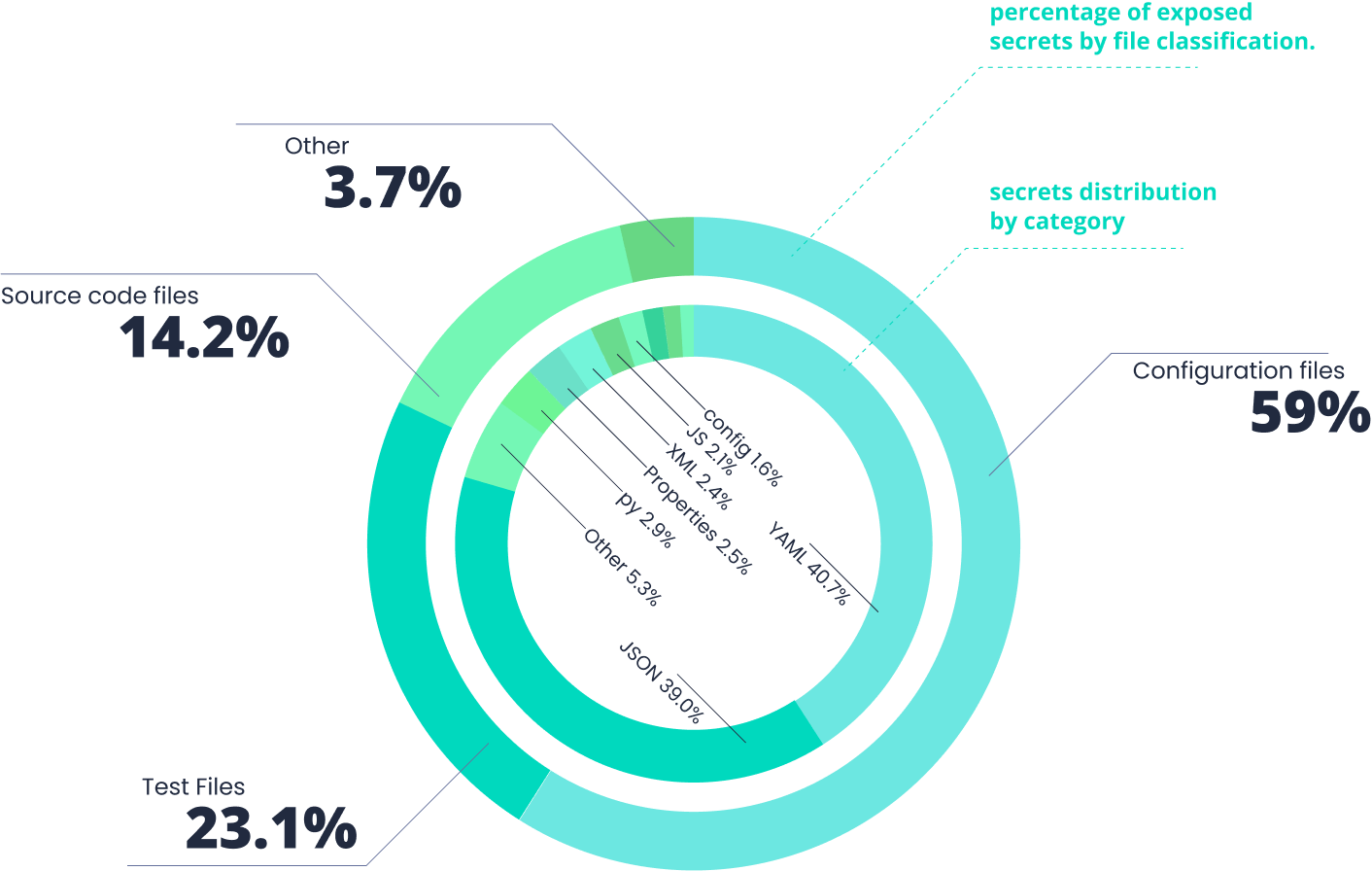 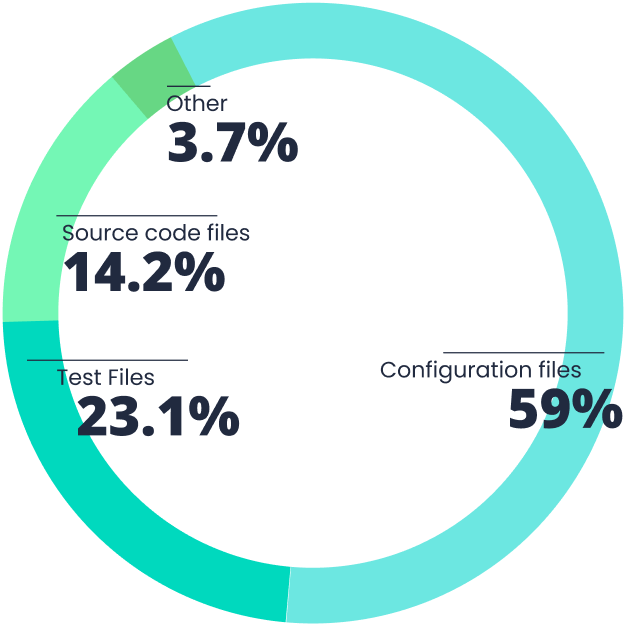 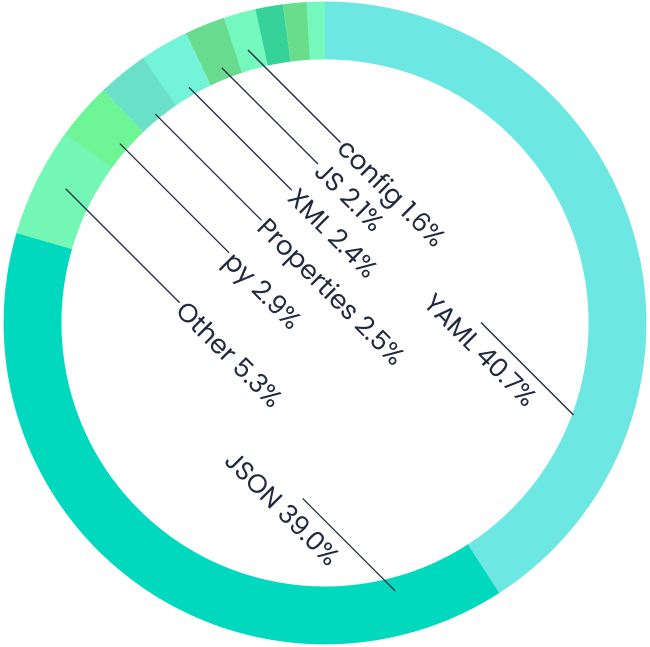 Next in popularity, but with a very large difference, are .py, .properties, .xml and .js files. The top 5 file extensions account for 87% of all the secrets. Unsurprisingly, the majority of these secrets are found in formats typically used for configuration files (.yaml, .json, .properties, .xml).

Base64 encoded strings are

these three categories
represent 78.54%
of all secrets

When we combine the
secrets category and the file
classifications results, we
find that 42.92% of plain-text
passwords are in configuration
files, so by paying extra attention
to these secrets in the relevant
files, we can remediate about
20% (18.26) of all secrets.

When we combined the secrets category and the file classifications results, we found that

of plain-text passwords are in configuration files, so by paying extra attention to these secrets in the relevant files, we can remediate about 20% (18.26) of all secrets. 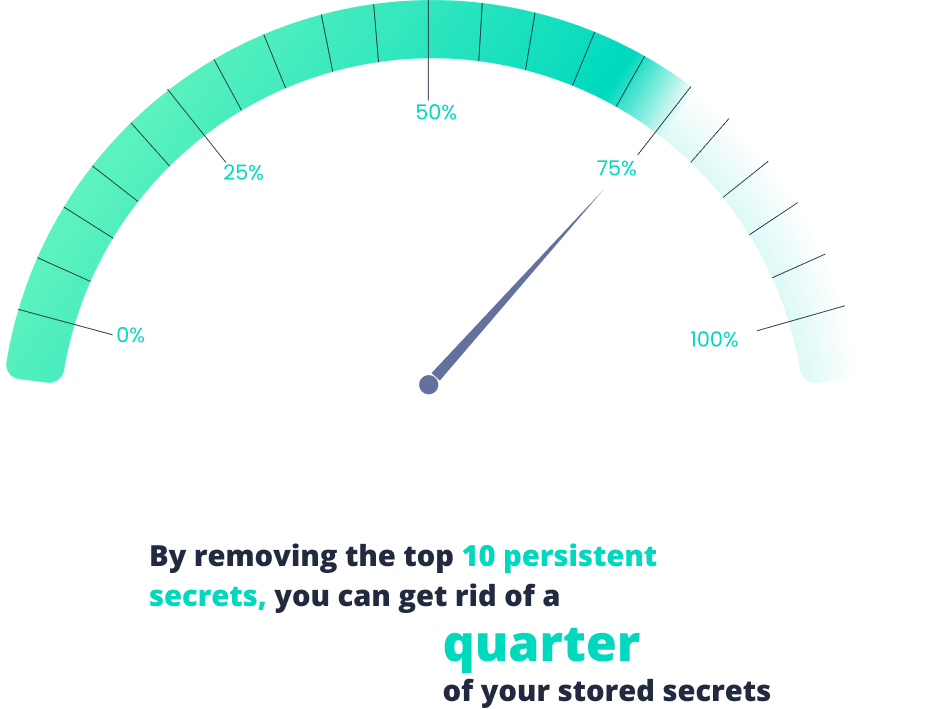 The top 10 most frequent secrets account for 25.49% of all the detected secrets 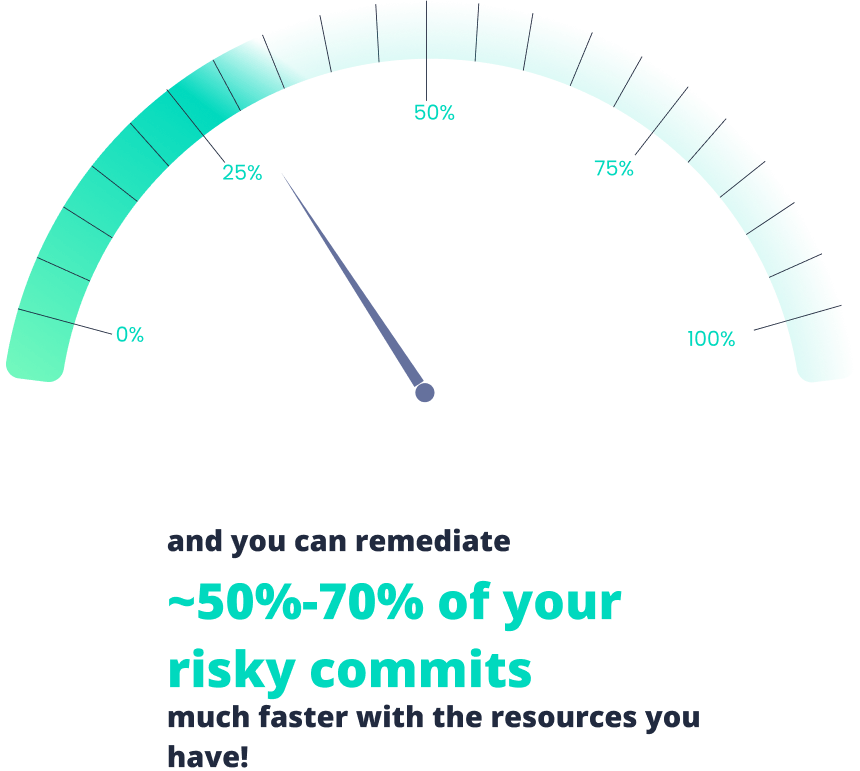 The Mean-Time-to-Removal (MTTR) is found to be 90 days, which means those secrets are stored in source code repositories for about a quarter, on average.

Secrets-in-code are here to stay, and more than that, they will multiply. Software development has changed, and code is no longer stored locally, but in the cloud. Cloud-based development has different security models, developers often have expanded access to the entire application including its production environments. A single compromised identity can have a catastrophic impact on the security of the entire application and infrastructure, and it all can start from an innocent mistake called secrets-in-code.

As we can observe from the report, there are several key actions you can take to quickly identify or even avoid the majority of your organization’s hard-coded secrets. The first and one of the most significant ones is to identify the most involved developers (tested case is top 10), since they are responsible for more than 56% of the detected secrets on average.

Furthermore, if you want a clue as where to find them, we can observe that new-to-company employees are more prone to insert secrets, so this group can be a good one to start with. Another factor to pay attention to are calendar seasons. We have realized that the first quarter of the year accounts for the largest number of detected secrets out of the year, so by focusing and paying extra attention to this issue in this period, you can prevent secrets’ insertions or remediate the inserted secrets fast and avoid potential risk to your organization. Pay extra attention to your public repositories, the most risky secrets are lying there!

Education, prevention & detection of secrets can thwart your next security incident!

How can you discover and remediate secrets when you are dealing with thousands of code files spanning tens of repositories? How can you ensure developers don’t repeatedly hardcode secrets when your organization has hundreds of them working across many different teams and software projects.

Read our practical guide that lists out the key steps you can take to effectively discover, remediate and prevent secrets in code. Make sure your organization is not a victim of a cyber attack caused by a hardcoded secret!